Up at 4:15am on race day, Adam and I left his mother’s home in Redmond at 5am and drove to downtown Seattle.  We were able to nab a parking spot on the street close to Jonas’ hotel.  We went up to his room and I left my bags there because I was riding with him later in the afternoon.  We had ten minutes to catch the light rail, which was just a three minute walk away.  Jonas was able to get us three one-way tickets on his phone’s app, and we made our way down, down, down to the waiting platform.  Yeah, us and hundreds of other racers!  The 5:49 train pulled up to our stop — and it was packed.  A few people were able to get on, but not many.  Fortunately there was another train just five minutes away, and we were hopeful that we would be able to get on that one.  It was a little anxious waiting, as the crowd behind us swelled with more racers awaiting the next train.  Lucky for us, we were positioned in front of the train doors, so we were able to slip on smoothly, but behind us the mass of humanity crowded their way into the small cabin space and we squeezed and squished and tried our best to accommodate everyone.

It was only two stops to the University of Washington.  I felt terrible for the people waiting at the next stop, Capitol Hill, because there just wasn’t any room at all.  The worst part is that the next train wasn’t for another 12 minutes, and our race was to begin at 6:30am. 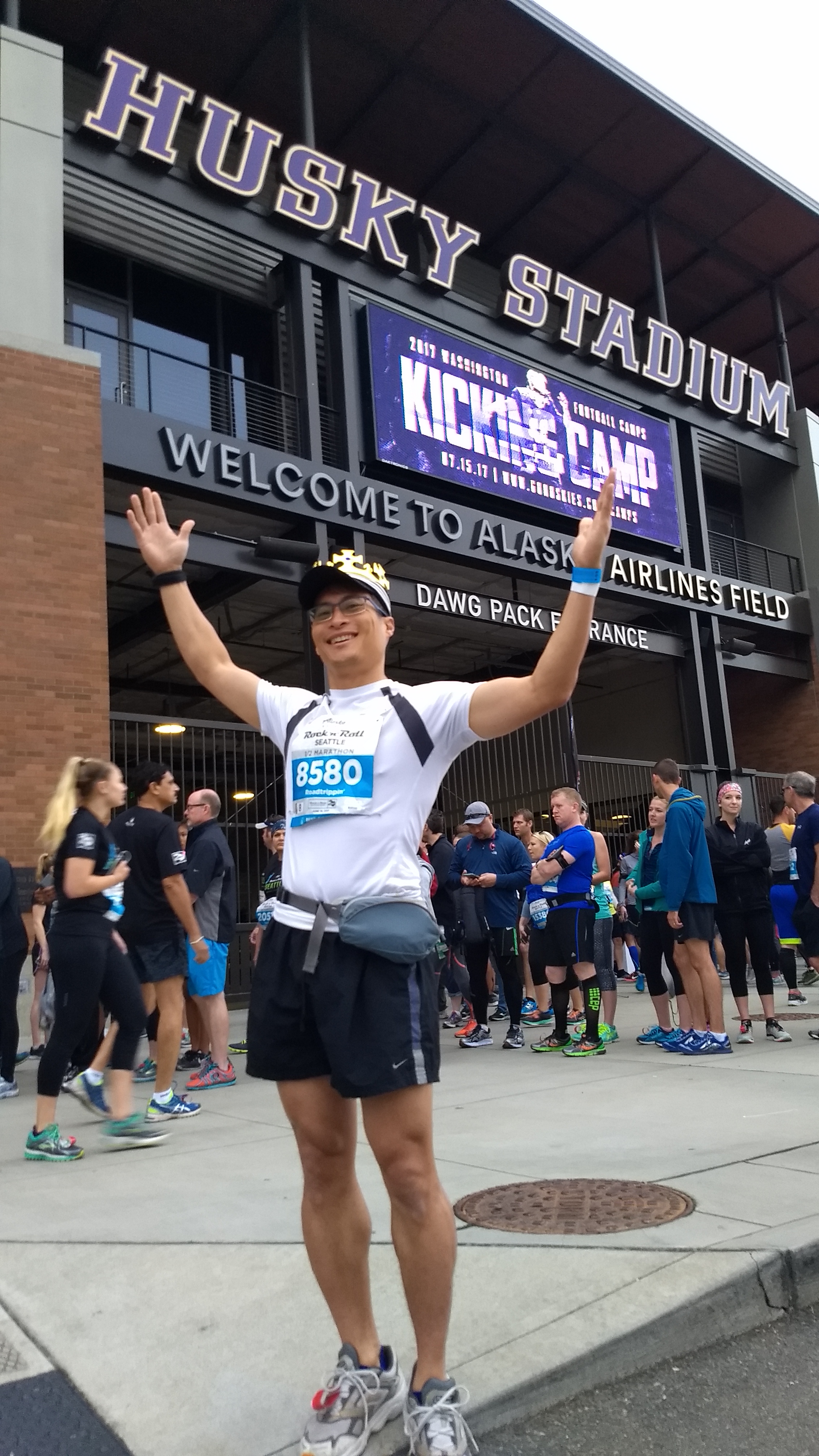 We arrived to the starting area by 6:10am, which meant only a limited amount of time to stretch, drop off any items for storage, and for using the bathroom.  The last part was pretty much impossible, because everybody was wanting and trying to use the restroom.  The line for the portable toilets stretched and stretched and there was no way that people would be able to use the facilities before 6:30am.  I needed to use the restroom, and I knew standing in that line would be fruitless, so I walked a few blocks past all the activity and found a large building that I hoped would have an unlocked door that would allow me entrance to use the restroom.  Thankfully, I was just a few paces behind an employee and she used her badge to clear the secure door, and I asked her if I could follow her in — she related that she too was a runner, and she understood my plight.  She pointed me to the restroom and SCORE!! a bathroom all to my very self so I could lighten my load (so to speak) to ensure a stress-free race! 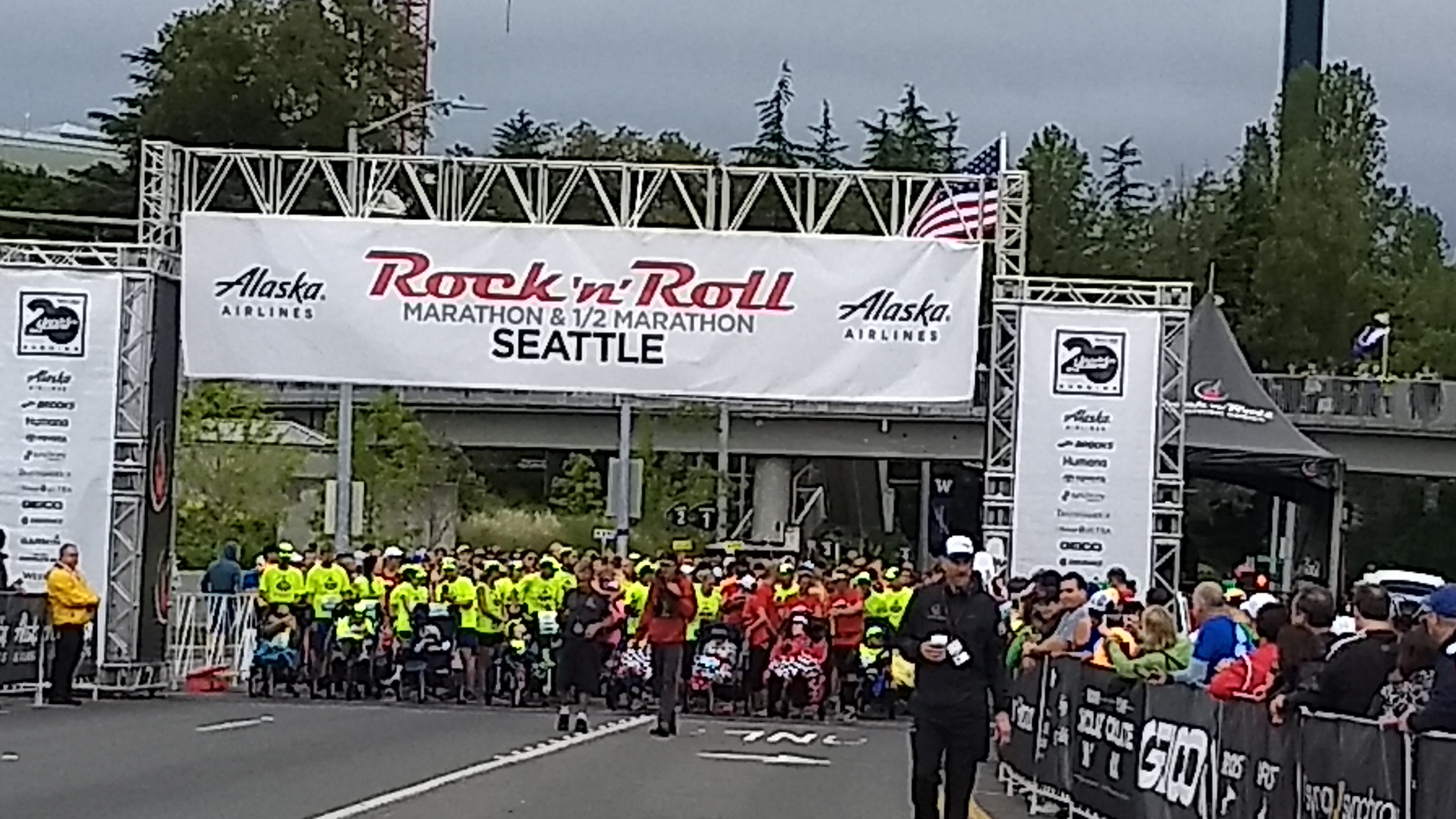 With a few minutes left to spare, I returned to the starting area and found Jonas at our pace corral, #8, as we were looking to finish in under two hours.  I did as much stretching as I could, then it was 6:30 and time to race!  Well, not quite.  First the wheelchair competitors took off, and a minute later it was corral #1, which is where Adam was placed.  Every minute the following corral would get up to the start line and then wait their turn for the horn.  So finally it was our time to run, and Jonas and I got right up to the front. 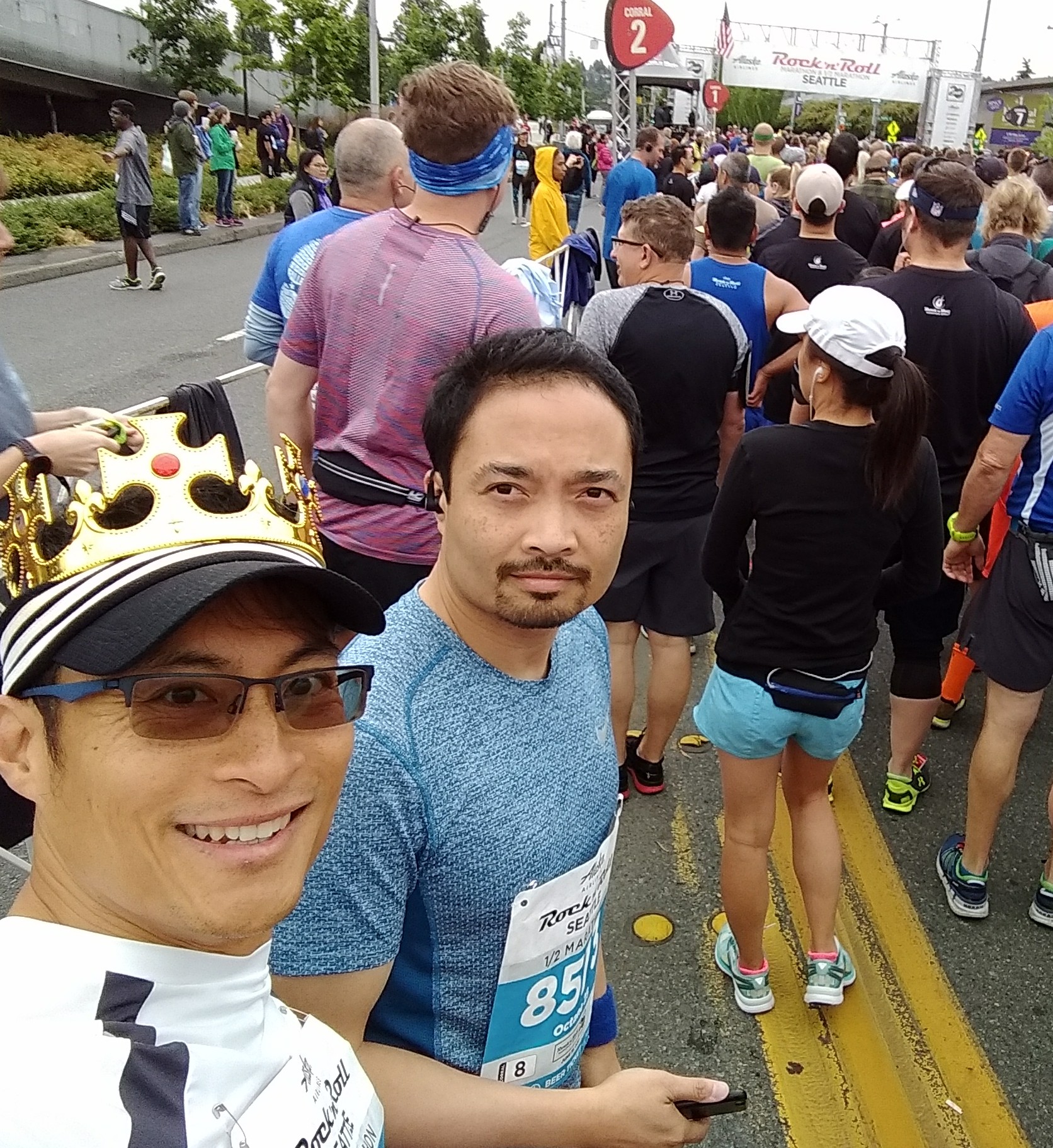 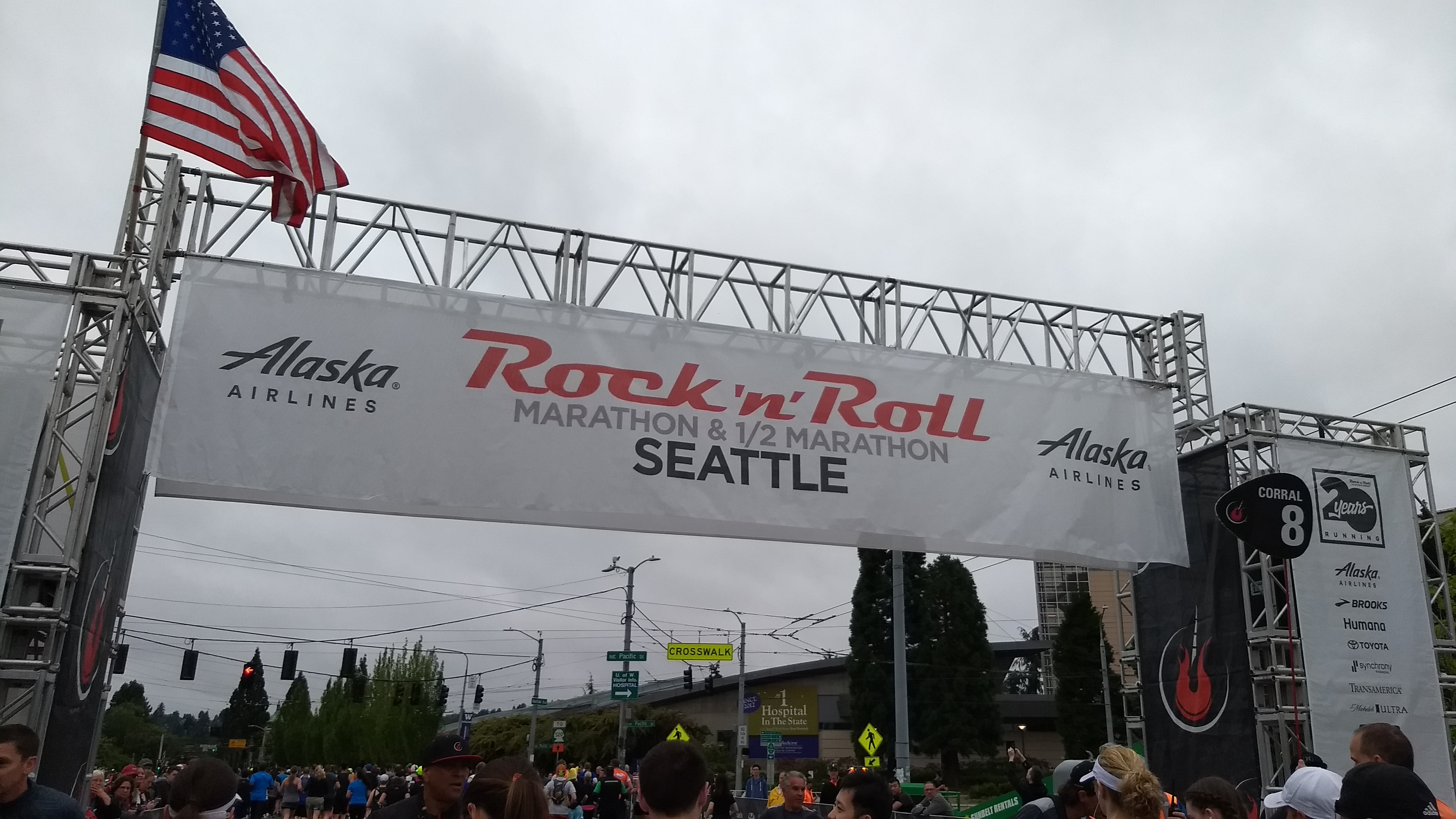 At around 6:39am and the horn sounded and the announcer released us from the start!

The most important thing for me was to not start out too fast, but to take my time and find my pace.  So I knew many people would run by me, but I knew that I would eventually pass most of them.  It was a beautiful morning and I was feeling pretty good.  It did get pretty crowded for the first few miles and this continued for at least until mile 9.  Jonas and I actually ran the first mile in under 8:20, which was running at a 1 hour, 50 minute pace.  That was my big goal to accomplish; 1:55 would be sweet too, and I definitely wanted to finish in under 2 hours.  There was a two-hour pace setter right behind us and I wanted to make sure that I was in front of that group for most of the race.  However, just before mile 3 that pace group passed by Jonas and I.  This could not happen.  So I picked up the pace and made sure Jonas was nearby.  I was able to pass the group but somehow I lost Jonas.  And that was the last time I saw him.

For the rest of the race I followed my 1:55 pacing bracelet to average around 8:46 per mile.  Problem was, I had somehow gotten behind by 2 minutes at mile six.  I ran the right pace but I sped walked through each water / Gatorade station to make sure that I was hydrated.  I also stopped at a “Selfie Photo” stop to take a picture with some Seattle characters. 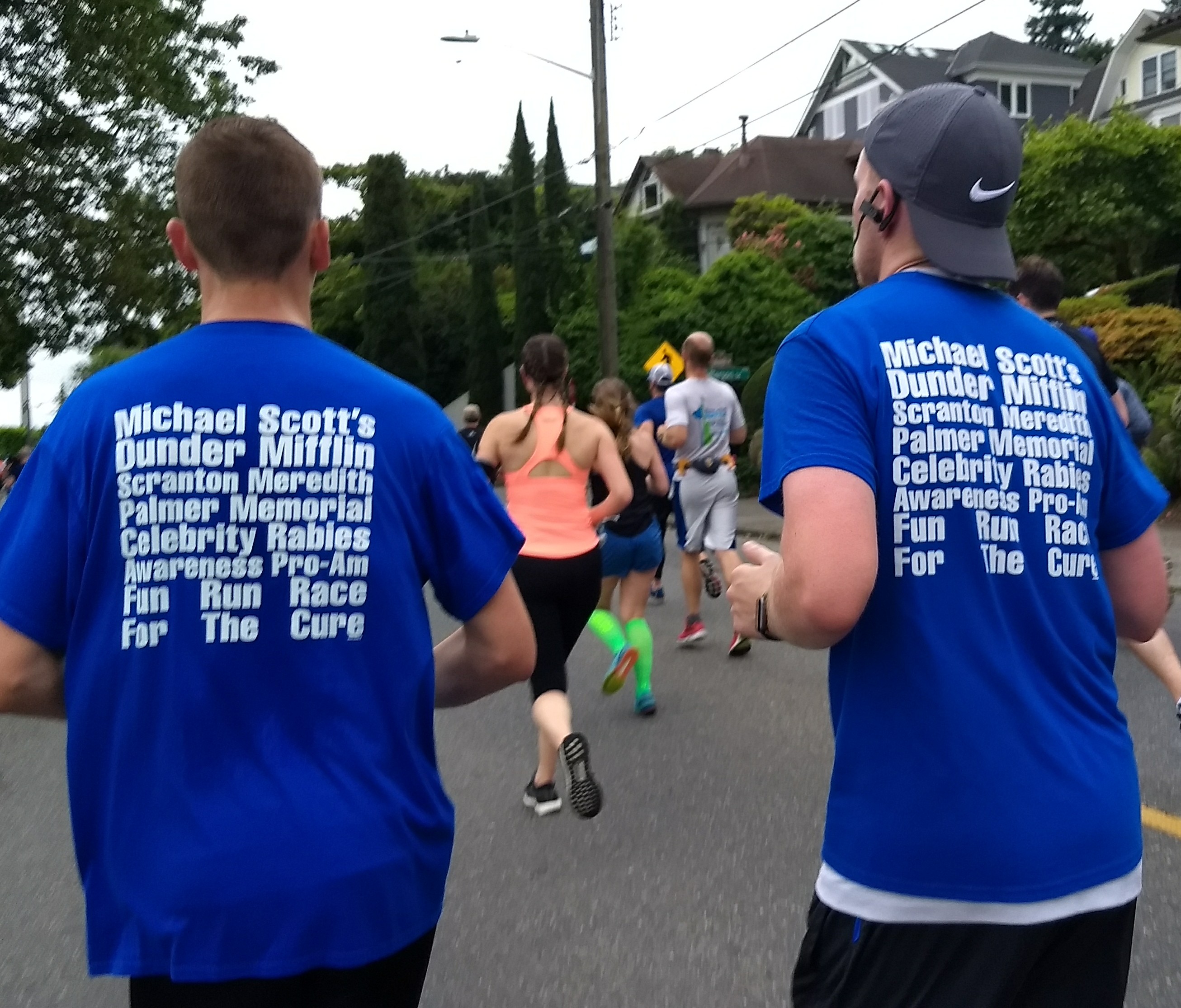 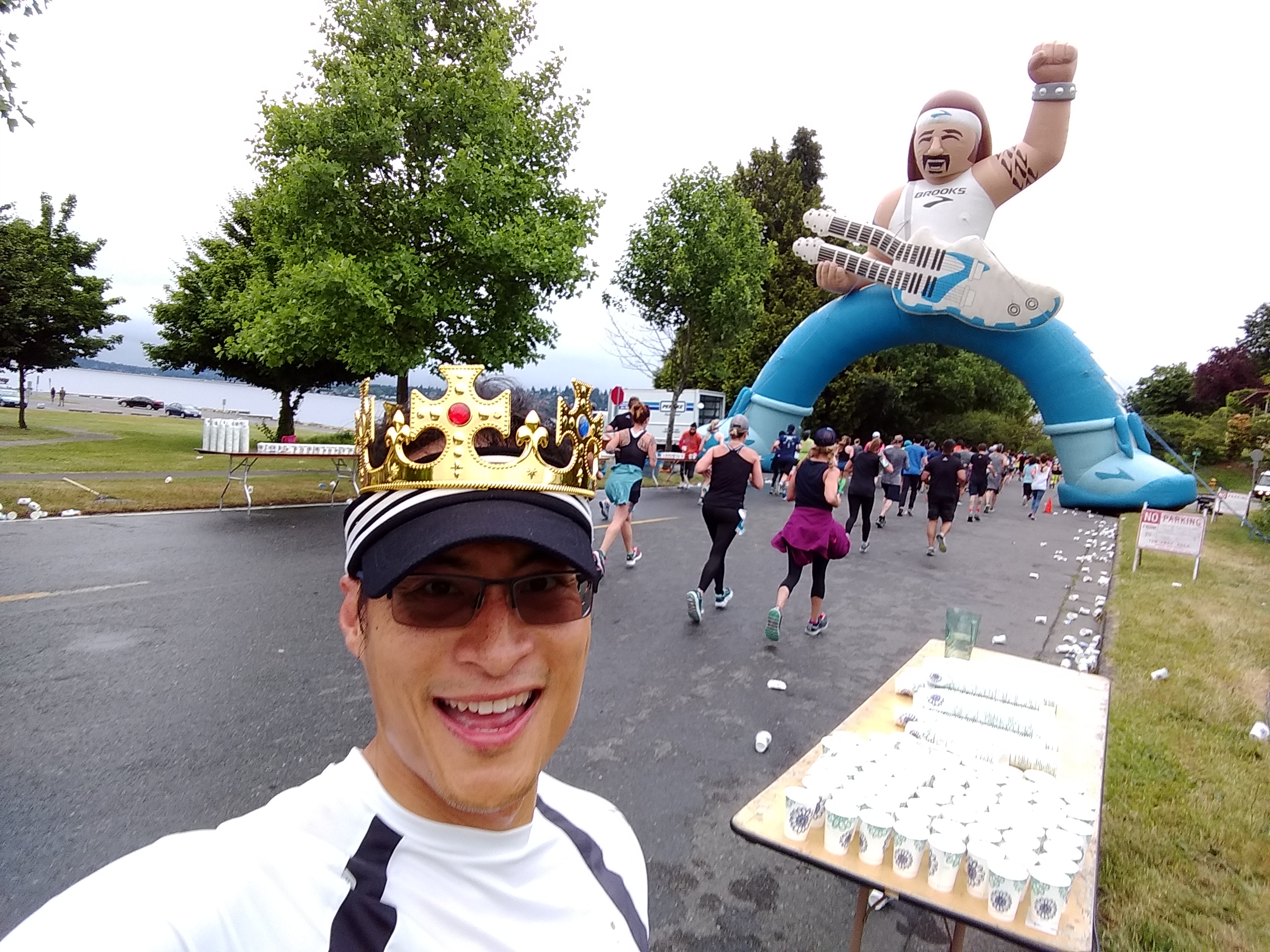 I was feeling pretty good, but at mile 8 my bothersome knee began to ache.  This is something that I experienced at my last half marathon in Phoenix, and also on my last training run.  The pain wasn’t super severe — probably a 6 on a scale of 1-10 — so I pressed on, confident that I could get my 1:55 time.  By mile 10 I was only a minute behind the pace, so for the last three miles I ran faster and before I knew it, I was approaching Safeco field and the finish area.  However, I first had to go uphill (sneaky bastards!) and wind my way around up — but what goes up must come down, so it was a downhill fast run to the final corner, and when I turned there was only a tenth of a mile left.  I felt pretty good despite my knee, and I sprinted the last segment, pausing just before the finish to hear my name and soak in the moment.  Unofficially, I had finished in 1 hour and 54 minutes!

Jonas experienced the same knee injury that I sustained, but he wasn’t able to run through it, and he ended up doing a lot of walking / running.  He finished in 2:31.

Half marathon goal accomplished.  Could I have continued on to the full marathon?  Hell no.  My knee was pretty sore and it was difficult to walk afterwards, especially going down the steps.  Shortly after meeting up with Adam and Jonas post-race, Adam informed me that I have what is called the Iliotibial Band Syndrome (ITBS), which is a common overuse injury with runners.  It is caused by a number of factors — over striding, worn out shoes, poor form.  I must admit that my shoes are pretty old — 13 years to be exact.  So I think it might be time to buy some new running shoes.  Or maybe not, since I think I will stop running long distances (over six miles) for a while.  I’ve had my fill of marathons and half-marathons, I’ll stick to basketball and my group fitness classes at the gym.  But I did live to tell this tale.  And a new personal half-marathon record to boot.  The End! 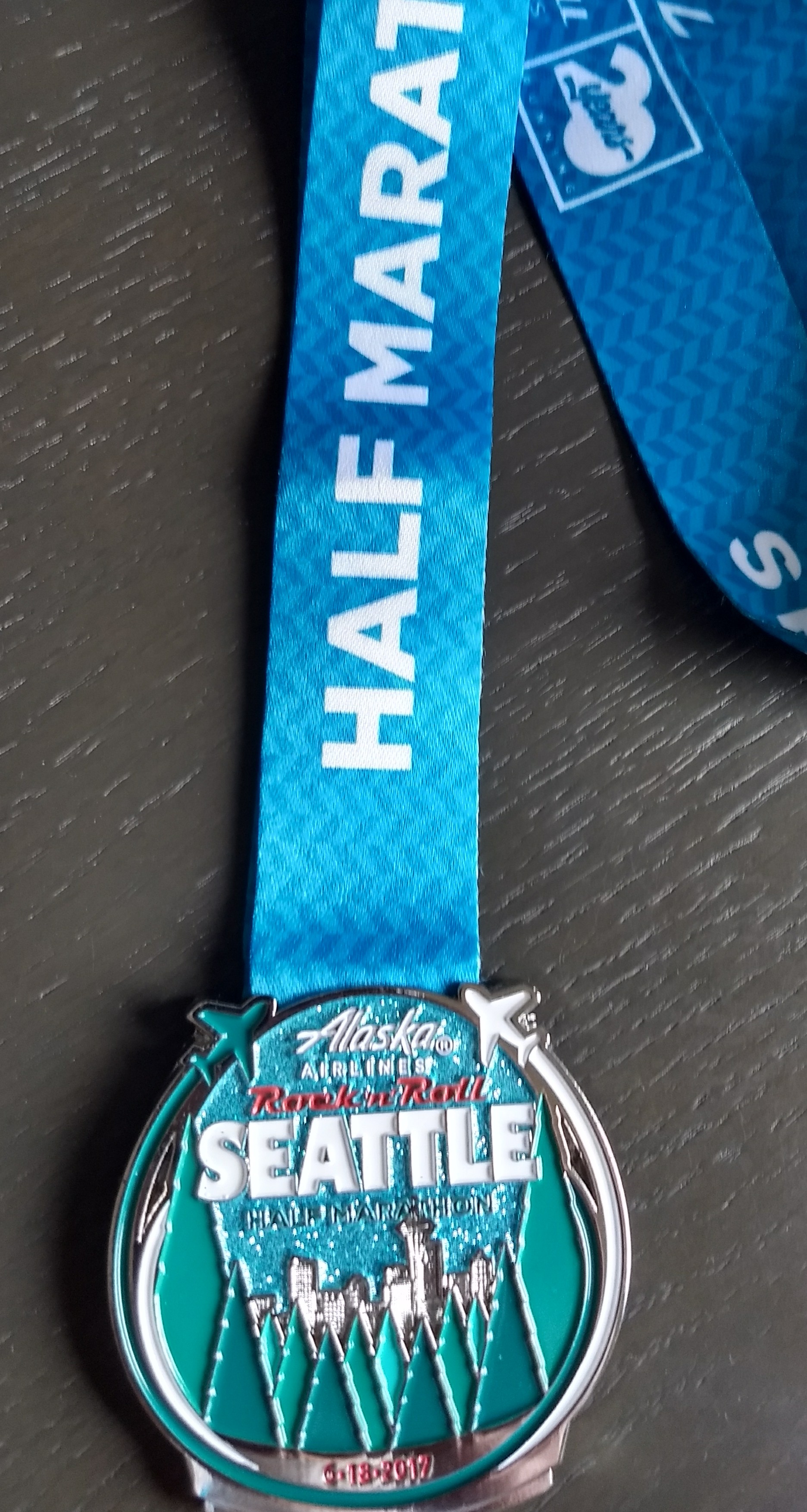 Later that same morning, someone put their Half Marathon medal on eBay trying to sell it for $50!

Weekend trip up to Seattle for the rock and roll half-marathon with Adam and Jonas. 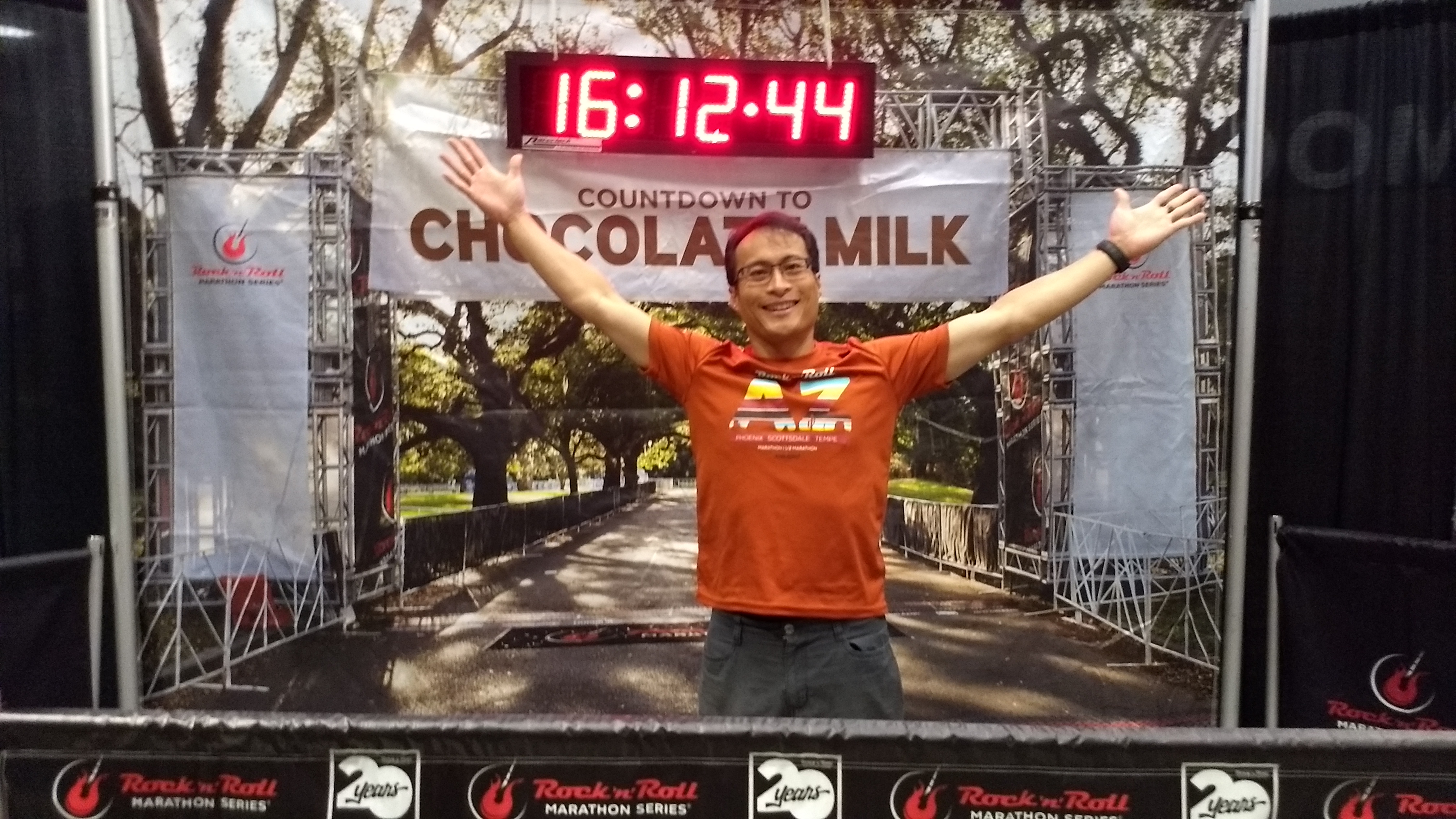 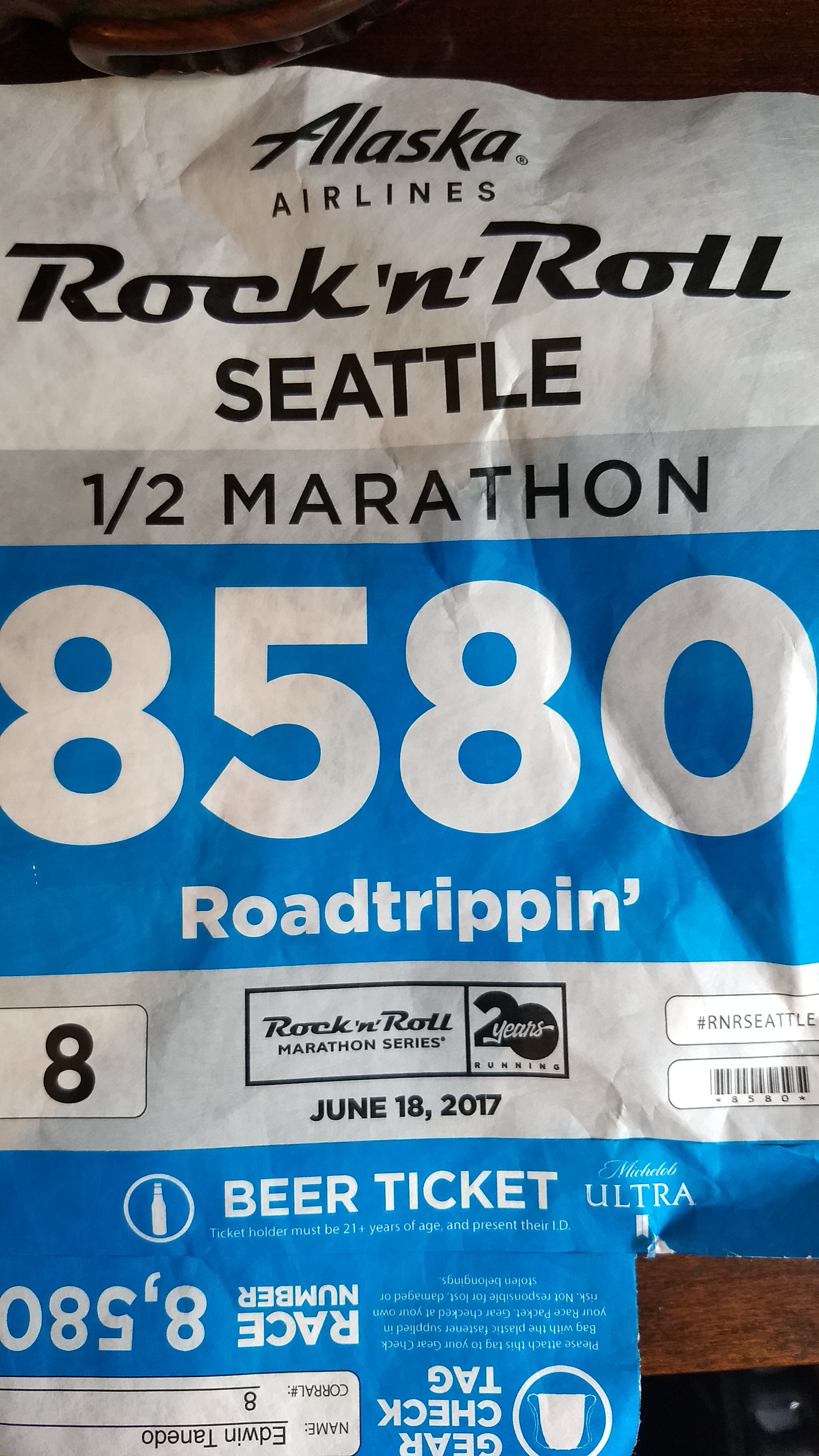 Here are the final expenses for our just completed weekend getaway in Seaside.  We scored a great deal on Living Social for the room, and to save costs we ate cheaply in the room with groceries (the room had a fridge for all that cheese we ate!).  Eating out, we only got some breakfast sandwiches to-go at McDonald’s, and ate out for dinner once and lunch twice.

Lisa found this cool little breakfast and lunch spot, located just a fifteen minute walk along the promenade from our hotel.  The food was delish! 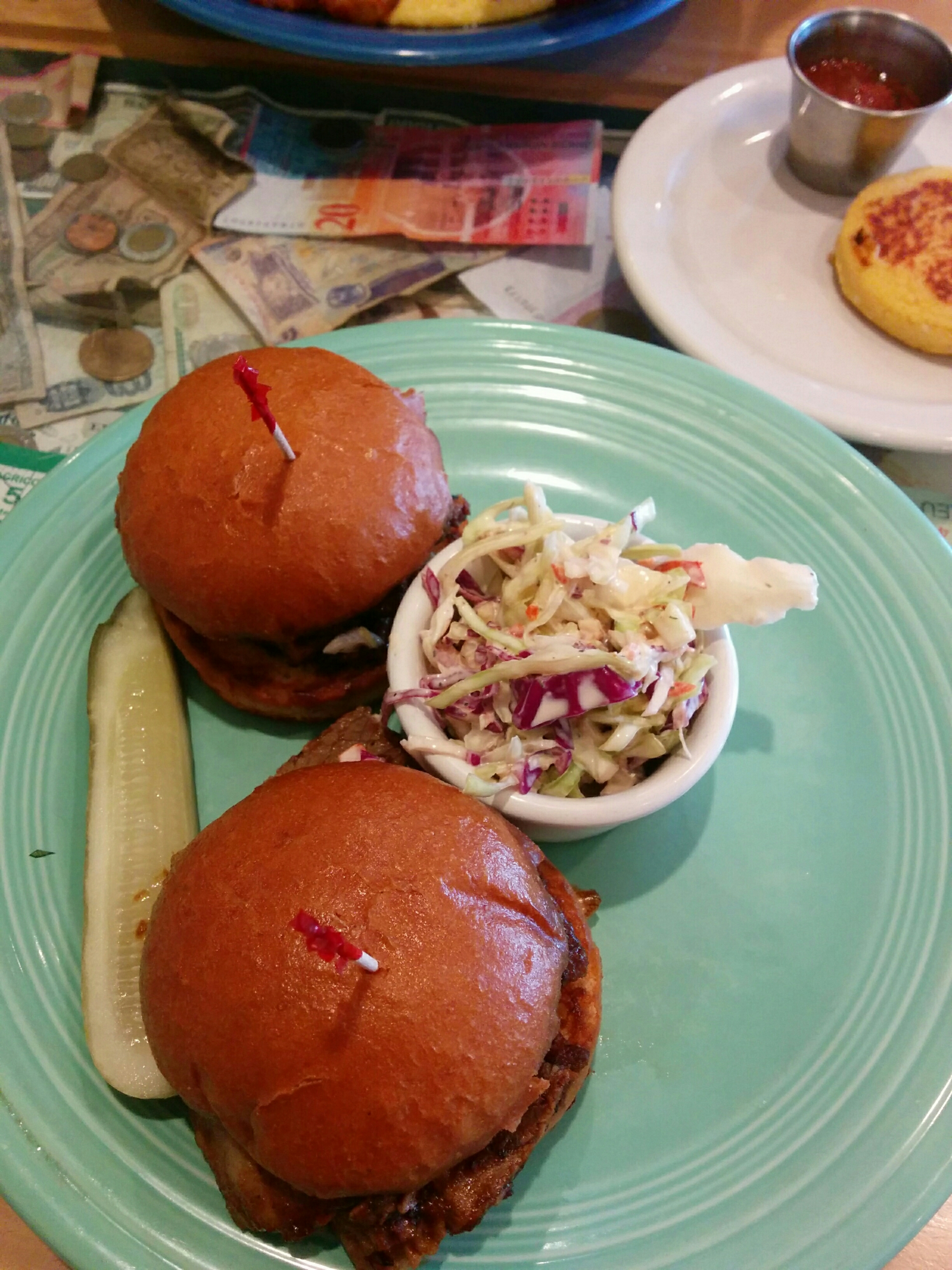 I went with the beef sliders and one arepa 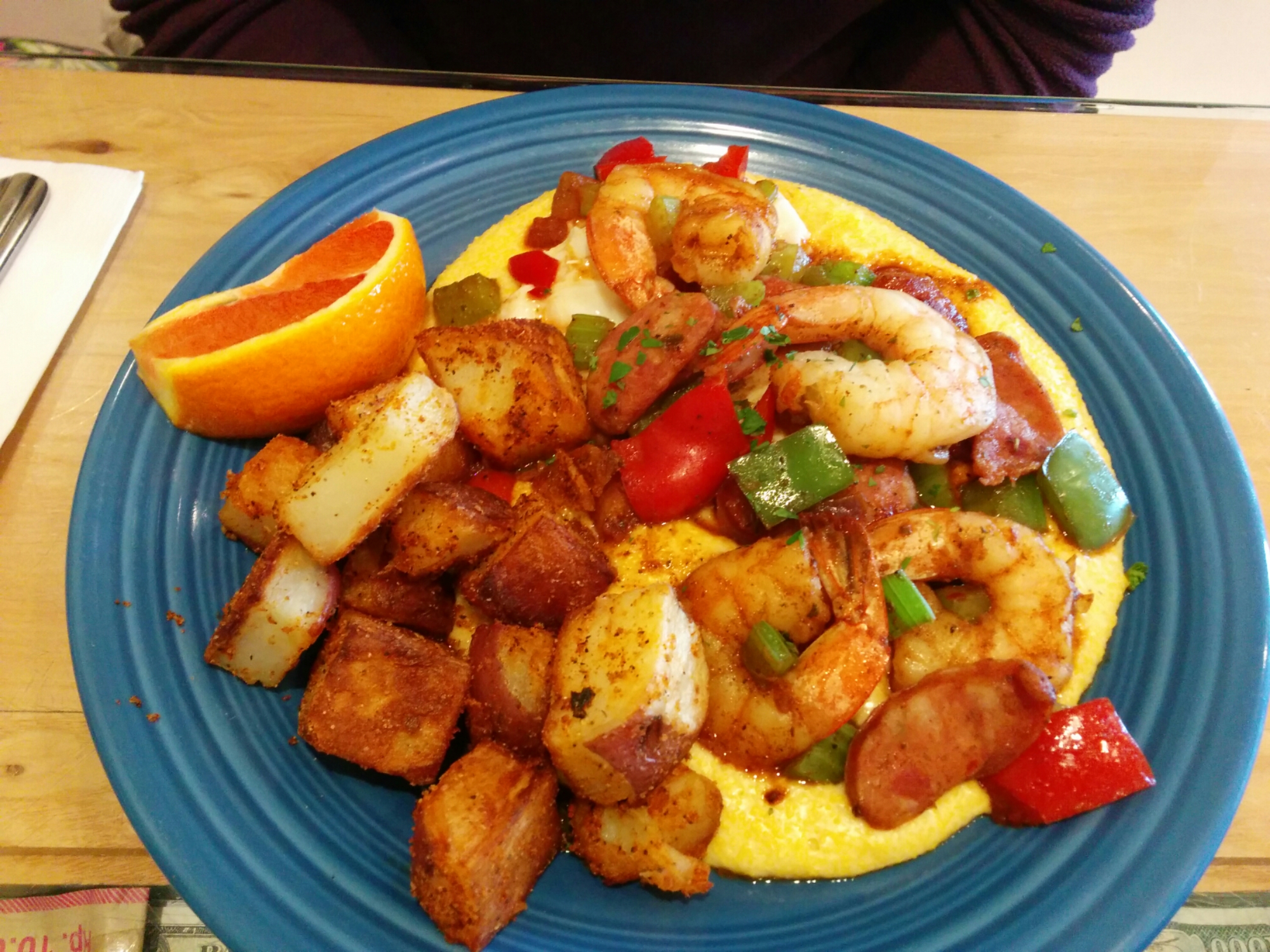 Lisa opted for the spicy shrimp and grits 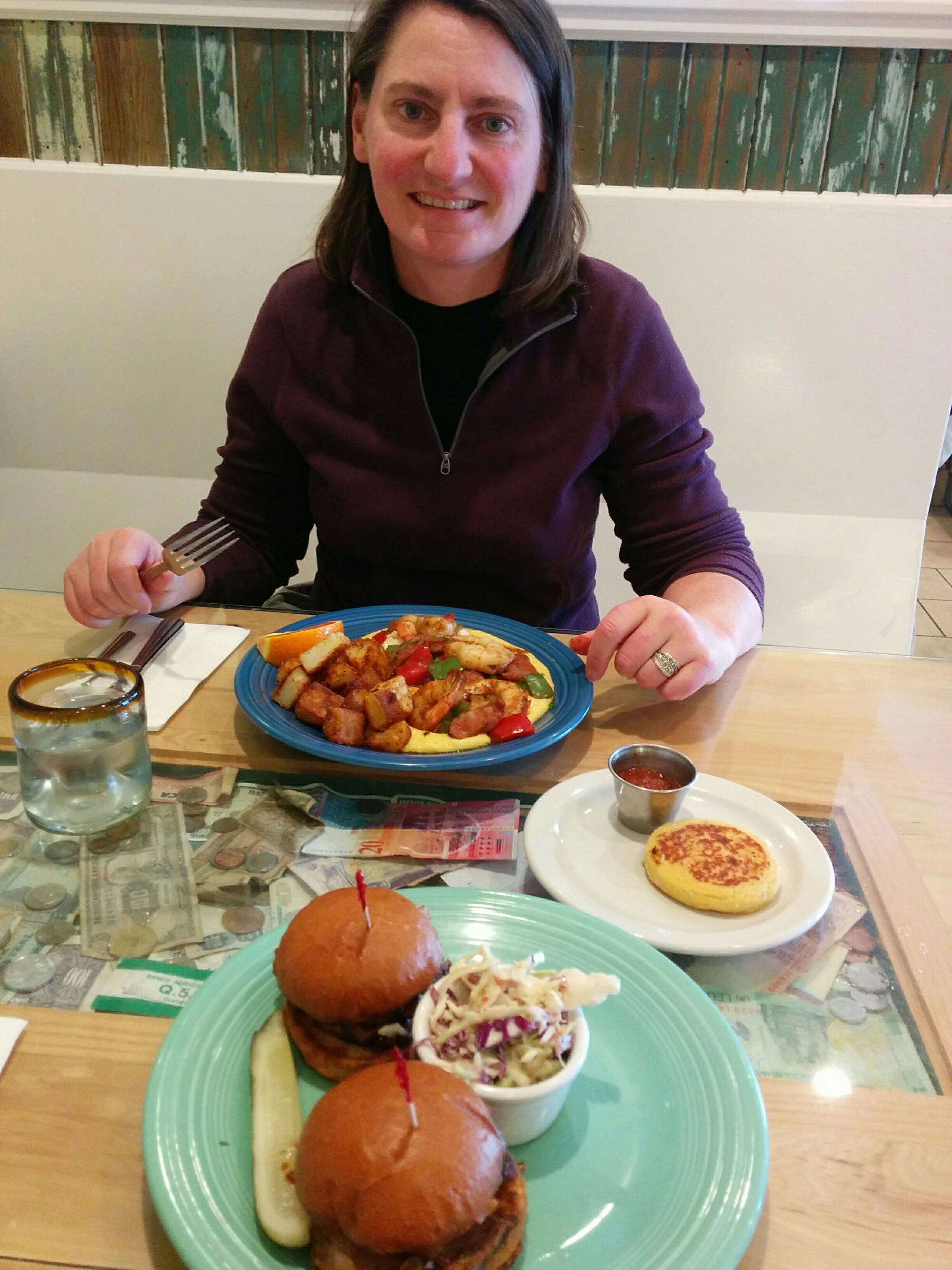 Training for the Seattle Rock and Roll Half Marathon, took a rejuvenating early morning run to the Tillamook trailhead and along the beach to… 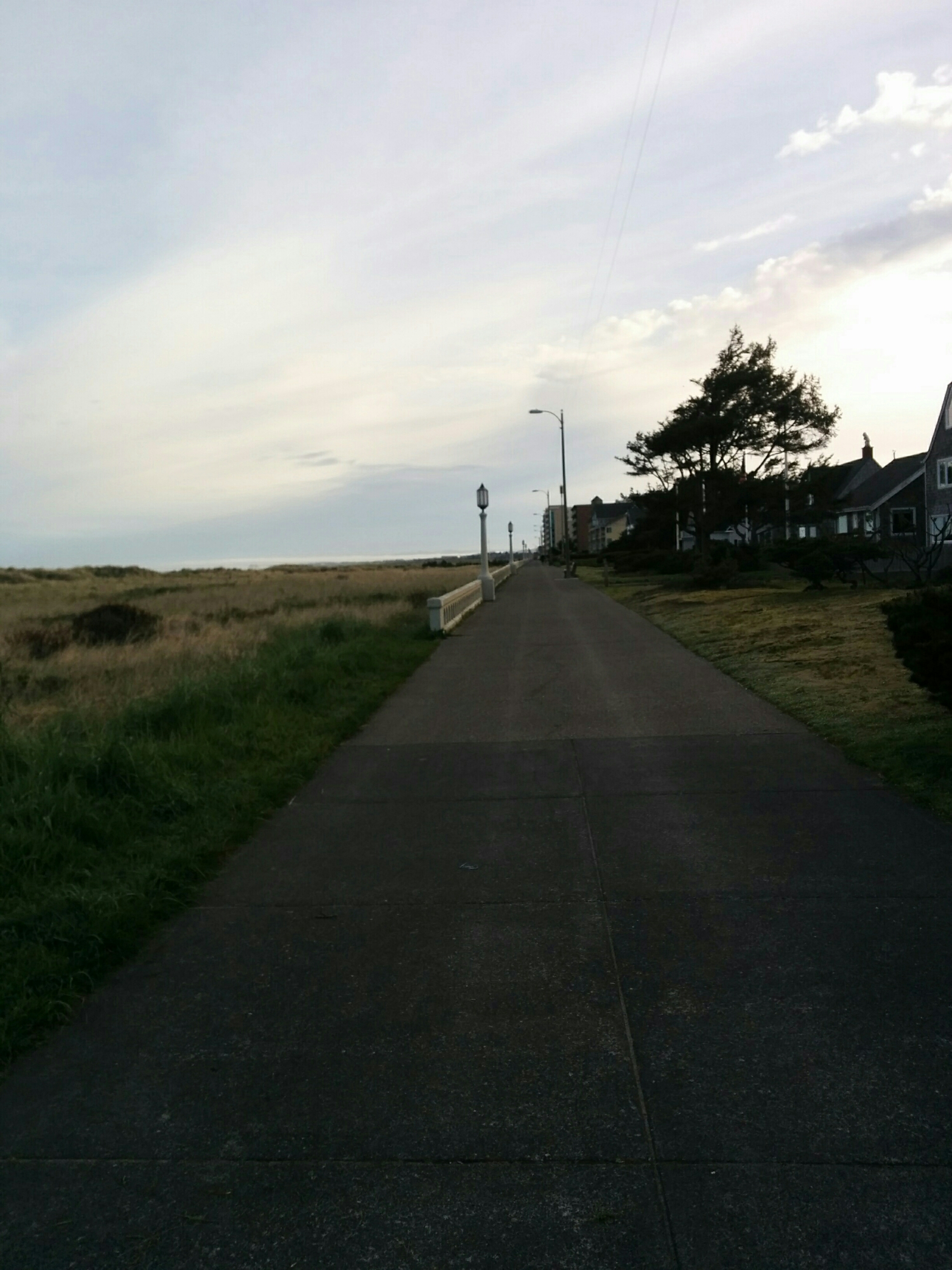 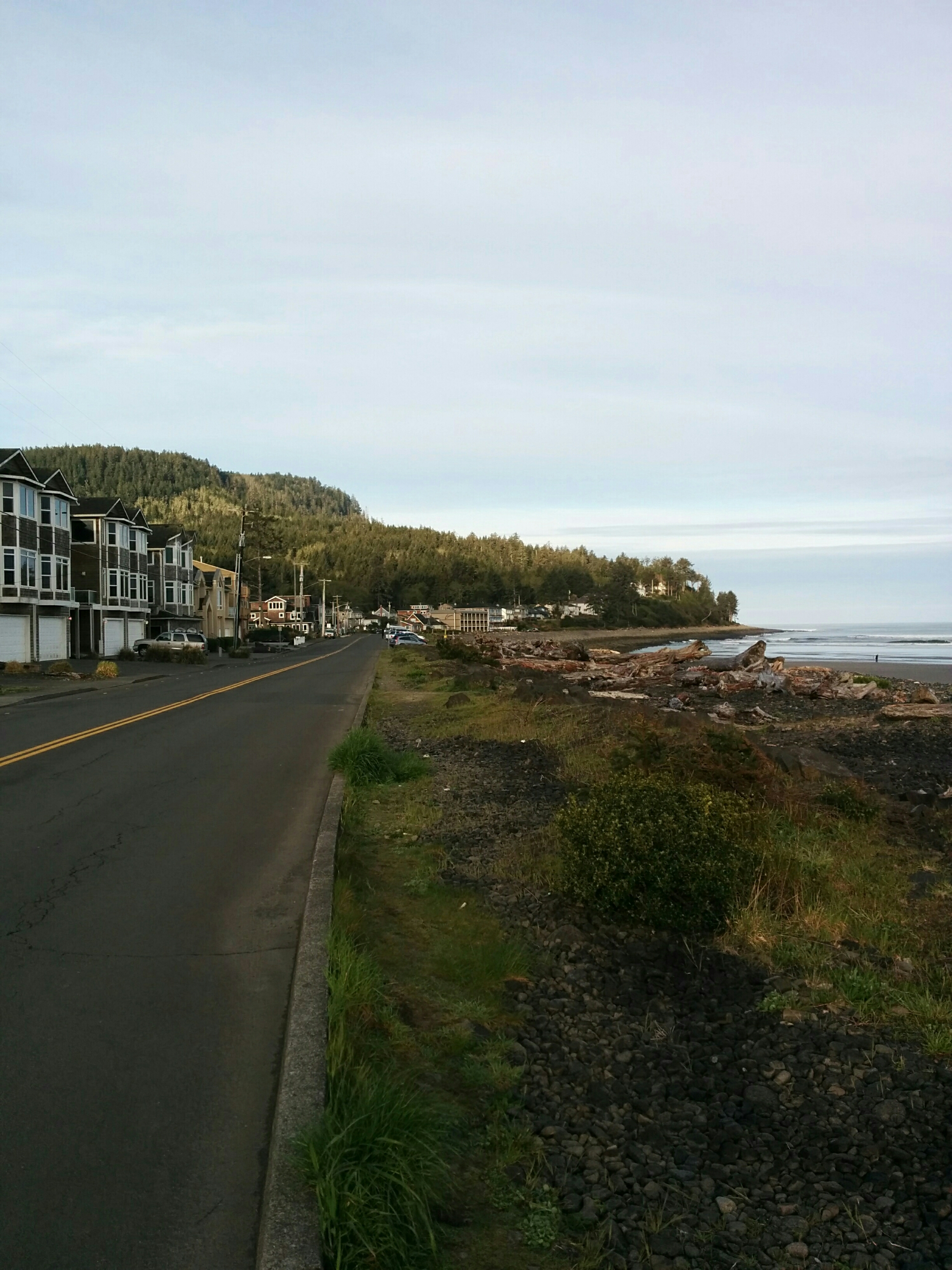 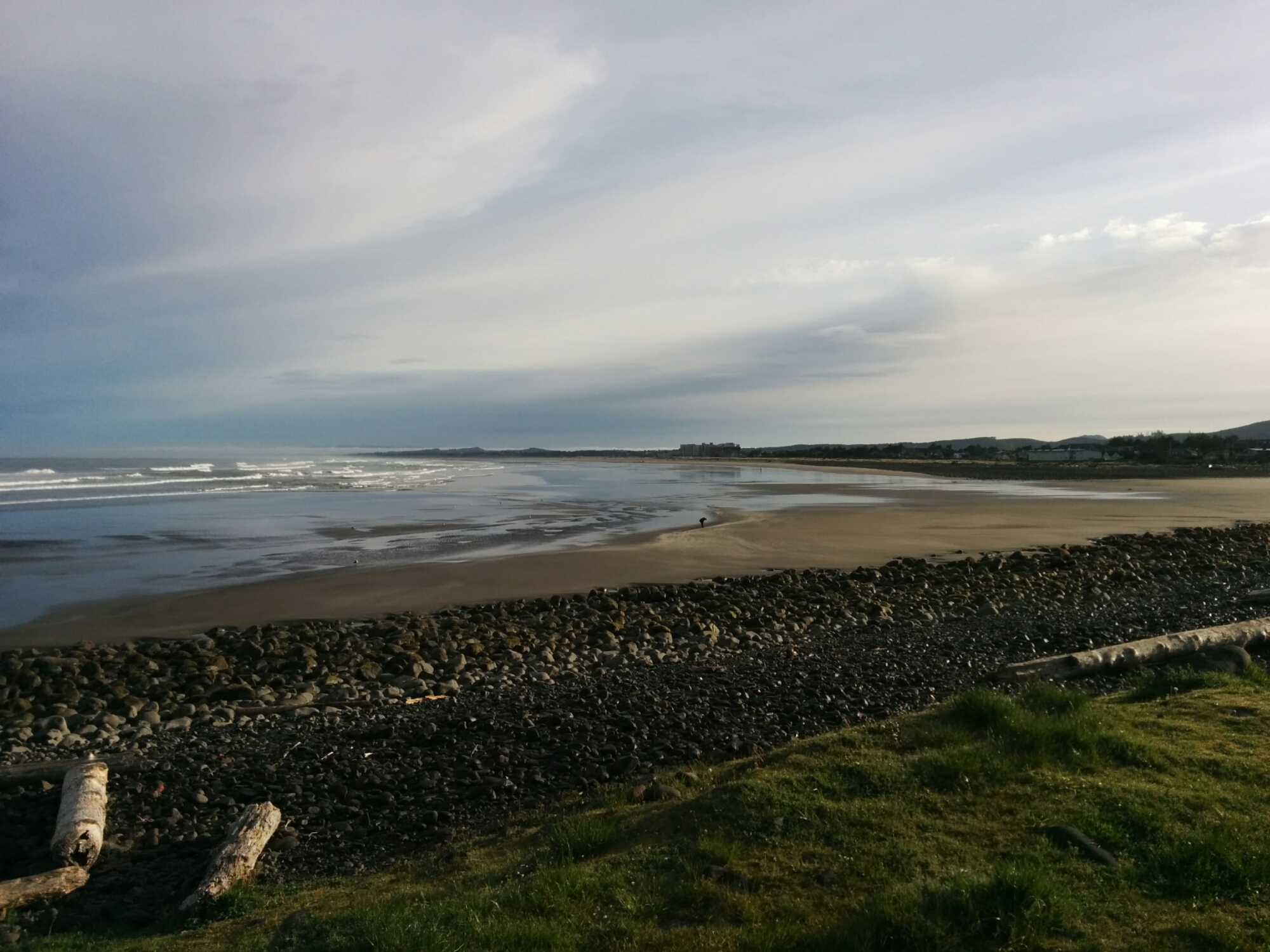 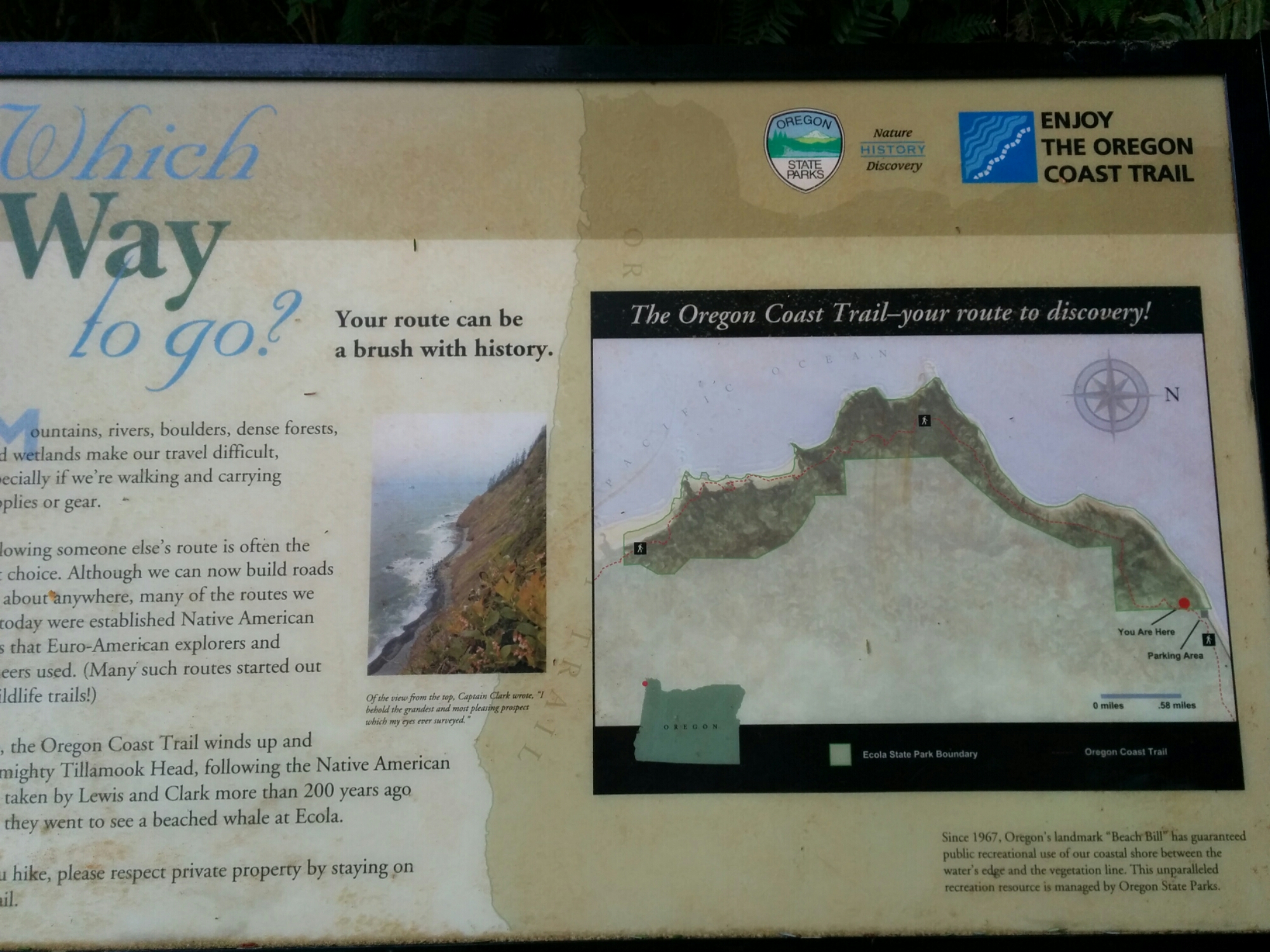 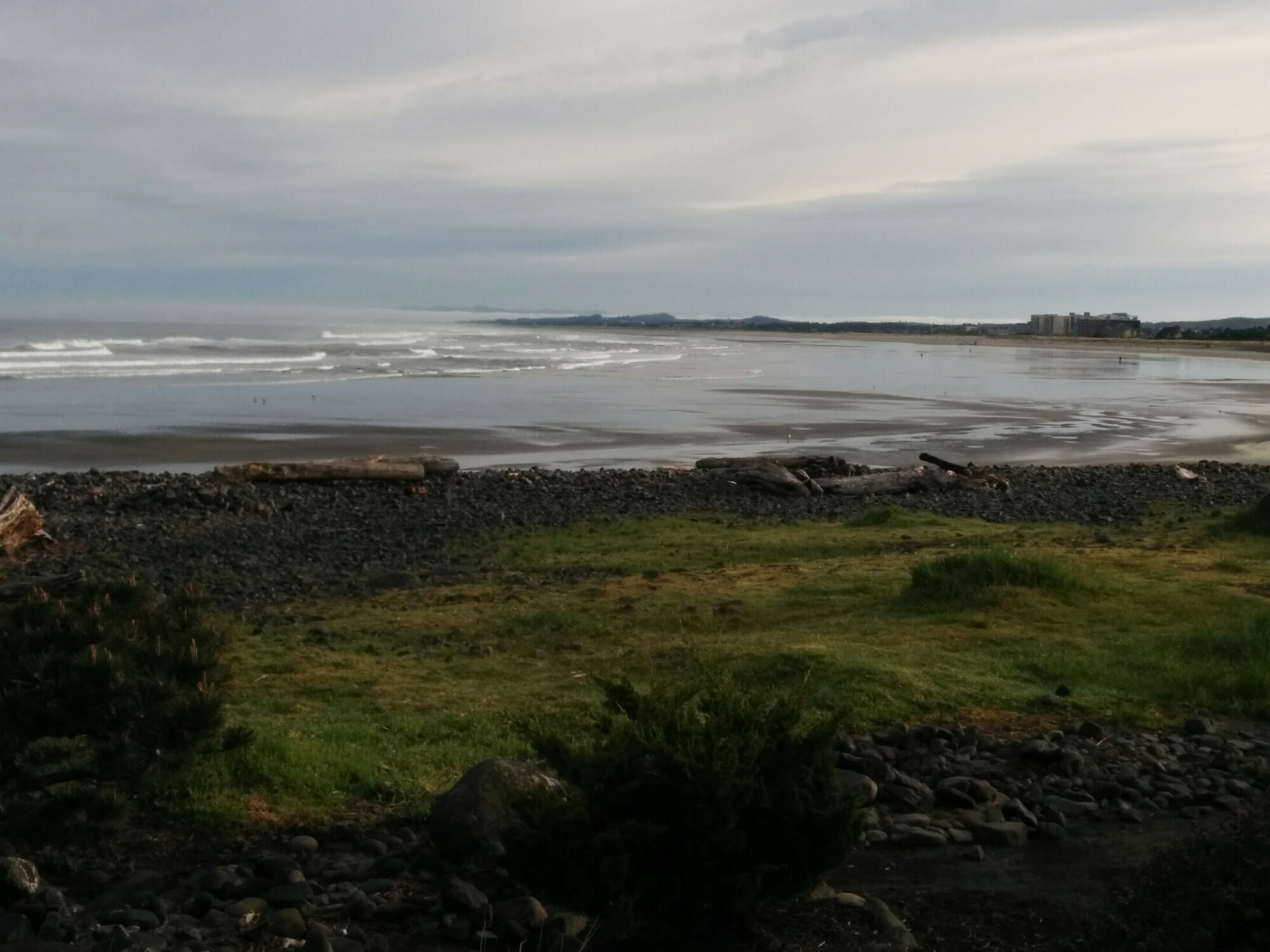 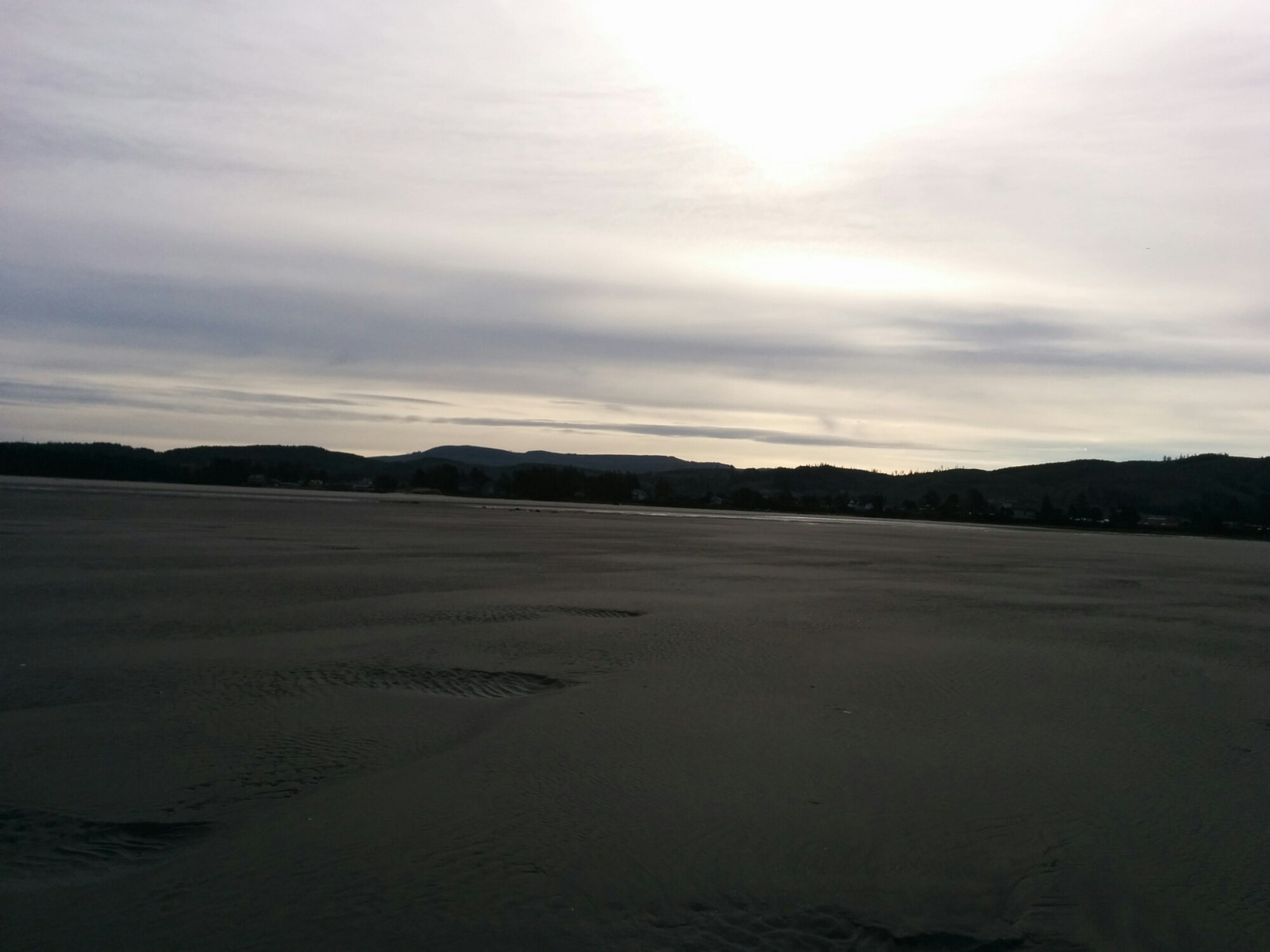 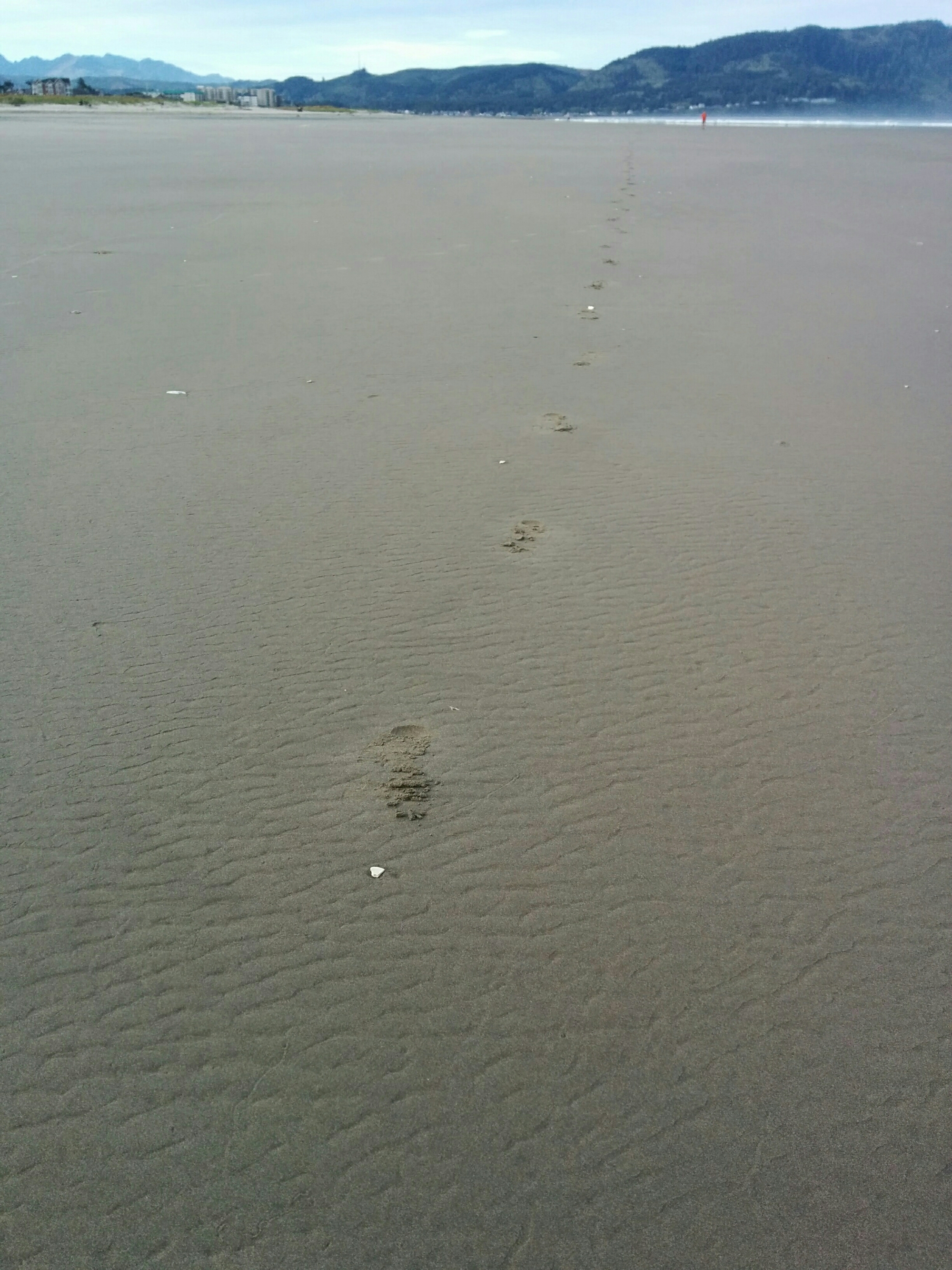 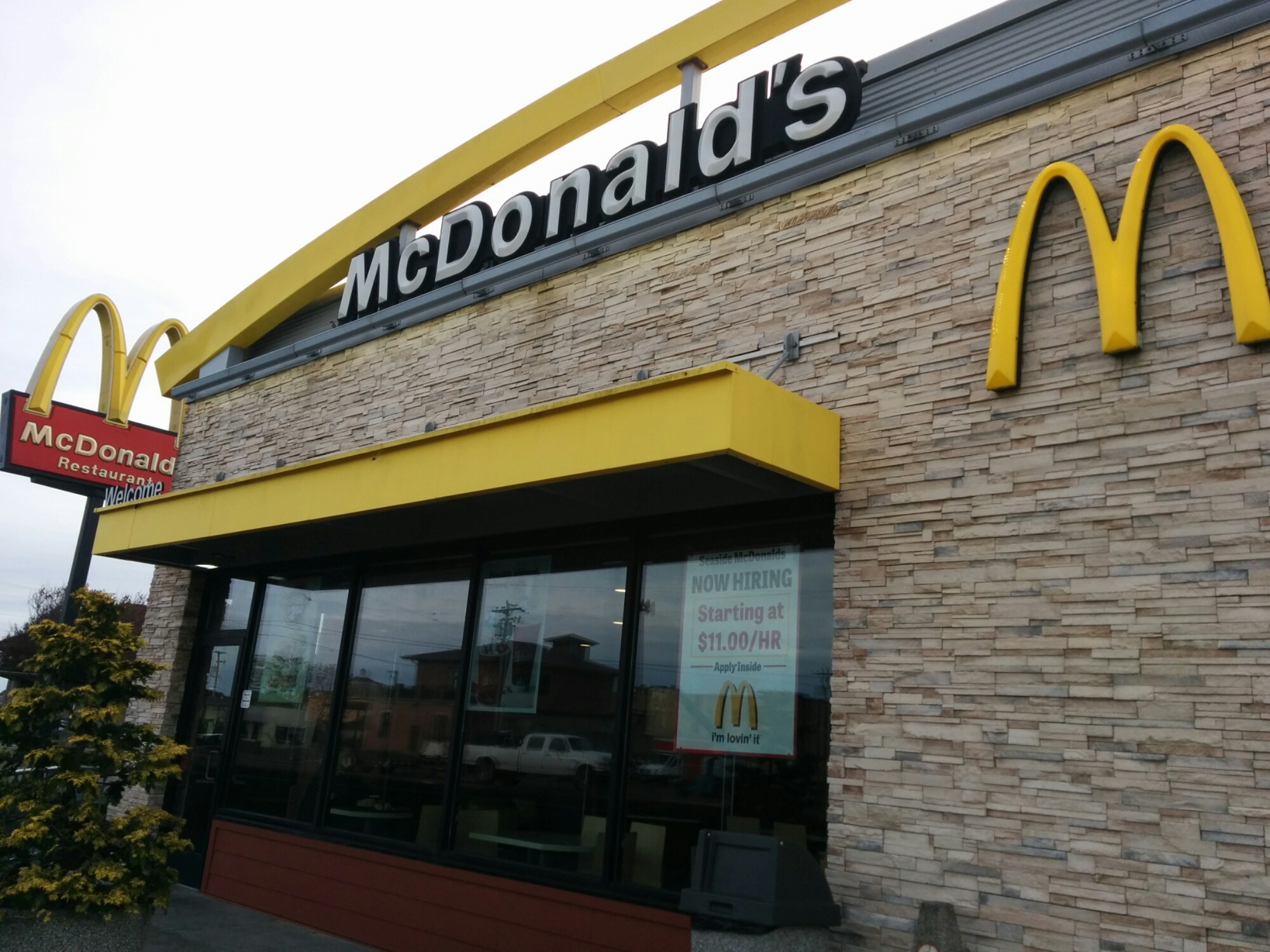