Long day enjoying the countryside of Tuscany and visiting three beautiful towns — Siena, San Gimignano and Pisa.  Our guide stated that this has been the hottest week of weather in the last fifty years, so after melting in 41 degree heat all day long, we were looking forward to our hotel in Pisa and taking showers to freshen up and get rid of that sweaty, sticky feeling.  We are staying at a hotel near the train station, Hotel La Pace.  It’s a little worn and it appears to have been a grand hotel back in the day.  TripAdvisor reviews are positive and it has what we need — location, WiFi, breakfast in the morning and a reasonable rate.  What it doesn’t have, however, is a fully enclosed and watertight shower area.

It is a standard bath tub, one that you would find in any American home.  But instead of a fixed shower head, it has one of those hand held adjustable shower heads, propped up in the corner of the tub.  And instead of a shower curtain, it has a half glass enclosure that has hinges and can swing in and out.  Unfortunately in order for it to swing, there is no adhesion between the top of the tub and the wall.  So no caulking, just a gap for water to find its way through.  And unfortunately, Lisa thought she was doing the right thing by pointing the shower head from the corner to the other corner towards the glass enclosure, so that the spray wouldn’t jump out of the exposed part of the shower/tub.  Smart move, but in the this situation, it backfired because the half the spray went down the drain and the other half just went underneath and to the side of the swinging glass door, and onto the floor.

When her shower was finished, I heard Lisa yell a “Oh No.”  I got up from the desk and walked over to the bathroom … only to find a lot of water had seeped from the bathroom door and into our room hallway between the door and sleeping area.  I attempted to fjord the waters in the bathroom to fetch the rest of the towels and to start mopping up, but there was just too much water in the bathroom.  That meant I needed to get more towels.  And so I started towards the door to go down to reception, but when I opened it… water had infiltrated into the hotel hallway and down towards the elevator and stairs!!  Okay, this was much more serious than I thought.  I raced down to reception, informed the front desk (after waiting a couple minutes for him to finish serving other guests) and he said that he’d send someone up with more towels.  Back up to the room I went, waiting outside in the hallway for the towels.  While waiting, the door opposite ours in the hallway opened up and a lady came out wondering what the hell was going on — water was all over the floor in her room as well!  I explained as best I could what happened — she was not very forgiving — and she headed downstairs to tell reception to double their time for the towels and she needed a drink from all of this.

A short while later, I heard footsteps coming up and another lady appeared and I warned her to be careful about the water.  Her eyes got big and she immediately got on her cellphone, calling the owner and for additional assistance.  The hotel maintenance guy followed thereafter, with towels, bed sheets, shower mats and whatever else they could come up with to soak up all the water.  Thirty minutes after the discovery of the escaped water, our ordeal was over.  A mop bucket and more towels appeared and the lady in room 223 was taken care of.  We received new towels and an extra few to finish drying off the floors.  Lisa felt pretty bad about the situation and all that it caused.  Some good lessons have come from this:

For now, this particular tale is done.  Or so I think.  For it is now time for me to take my shower… 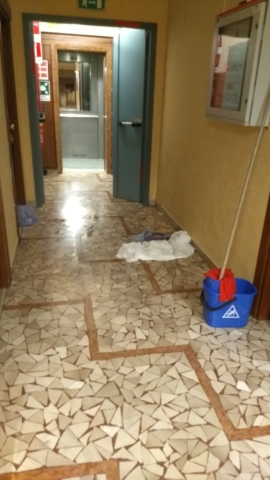 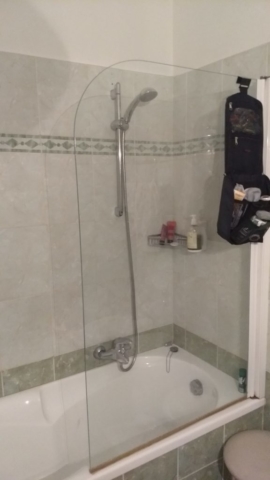 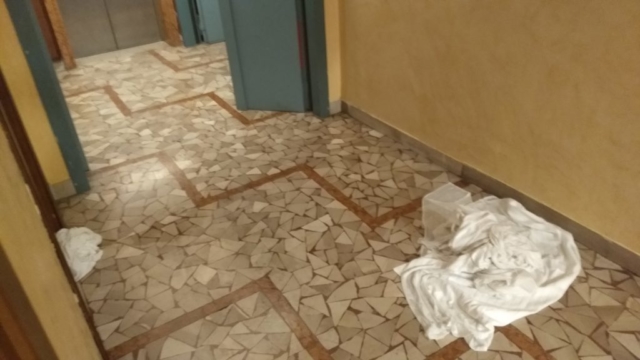